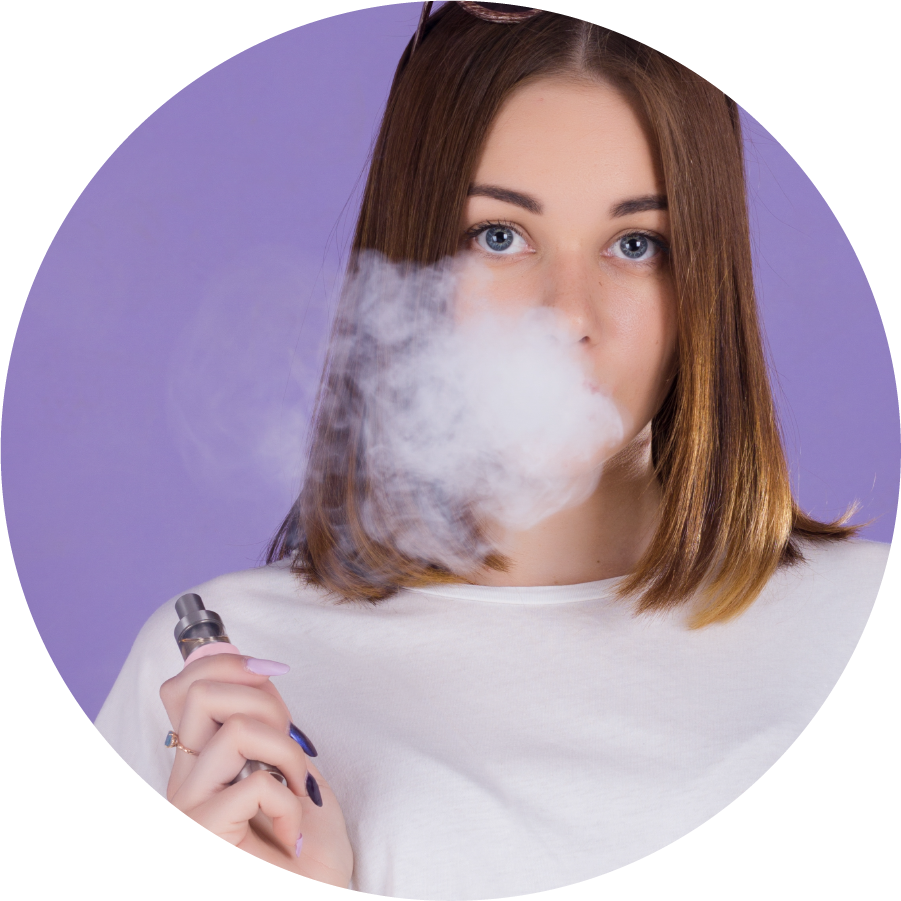 Vaping is less of a health threat than smoking, except when it comes to oral health.

The dangers of smoking cigarettes have been known for a long time so it’s understandable that smokers looking for a “healthier” way to get their nicotine fix have switched to vaping. This nicotine delivery system uses electronic cigarettes to turn e-liquid or “vape juice” into an aerosol vapor that is inhaled. The modern e-cigarette device was created by Hon Lik, a Chinese inventor who lost his father to lung cancer, as a way to help smokers quit smoking. However, due to the perception that vaping is a harmless alternative to traditional tobacco products and the enticing flavors that can be added to the juice, non-smokers–including an alarming number of teens–have also begun vaping.

What's so bad about vaping? Check out SayNo2Vaping.org for tips about talking to your kids about the risks of vaping.

‍A recent survey shows that as many as 37% of high school seniors and more than 17% of eighth-graders vaped in the previous year.‍

Some parents may not be concerned by this statistic‒after all, at least they’re not smoking, right? The problem is, not only are kids who vape at a higher risk of smoking traditional cigarettes in the future, they’re also causing permanent damage to their gums and risking tooth loss. Listed below are four ways vaping is detrimental to oral health:‍

1. Nicotine can lead to gum disease and tooth loss.

While vape juice contains a much lower amount of nicotine than traditional tobacco products (and can contain none at all depending on the user,) the negative effect of nicotine on gums is well known. Not only does nicotine restrict blood flow to the gums, it also affects our mouth’s natural ability to fight infection and replenish connective tissue, leading to a higher risk of gum disease and tooth loss.

If the thought of tooth loss doesn’t deter the desire to smoke or vape, consider that gum disease can contribute to other more serious diseases. Even without nicotine, other ingredients in vape juice can deteriorate oral health.

2. Propylene glycol is toxic to enamel and soft tissue.

One of the main ingredients in vape juice is propylene glycol (PG), which is safe to eat and inhale but when used orally breaks down into acids that damage enamel, and propionaldehyde, which irritates soft tissue. PG also causes dry mouth, taking away essential saliva, leading to cavities and gum disease.

While drinking water can help rehydrate the mouth, it’s not a replacement for saliva, which contains compounds that help protect teeth from the damage of Streptococcus mutans, the bacteria that causes tooth decay. Even worse, teens are likely to drink soda or energy drinks to get rid of dry mouth. This magnifies the damage caused by PG because these drinks contain sugar that feeds the bacteria and acids that further erode tooth enamel. Since traditional tobacco products don’t contain PG, this is one way vaping is worse for oral health.
‍

Vegetable glycerin (VG) is a slightly sticky liquid sweetener that helps Streptococcus mutans to stick to grooves on the biting surfaces of teeth. In addition, when mixed with the flavorings that draw teens to enjoy vaping, the combination causes four times as many microbes to stick to teeth and double the growth of biofilm. Flavorings also decrease the hardness of tooth enamel by 27%.

When combined with the damage caused by nicotine and PG, VG and flavorings create the perfect conditions for rampant decay, infections in the gums and tooth loss. That’s not cool.

4. Lithium batteries pose a risk of overheating and explosions.

‍While we can feel the collective eye-roll from adults who vape, the fact remains that the lithium batteries contained in a specific type of e-cig called a “mechanical mod” have been known to explode and cause extensive damage to the mouth and face.

Although not very common (2,035 ER visits due to vape explosions between 2015 and 2017,) they are generally caused by the misuse or improper care of the device. Considering that teens are likely not as responsible in the care of their e-cig device, it’s reasonable to assume they are at higher risk than most adult vapers to be injured.

It can be difficult to convince a teen who is desperate to fit in with his peers that the negative oral health effects of vaping and smoking cigarettes are worth quitting. But considering the impact a healthy smile has on the self-esteem and future career success of your teen, the argument is worth it.

Is Vaping Bad for Your Teeth? 7 Things to Know About its Effects on Your Oral Health (Healthline)‍

Is Vaping Bad for Your Teeth? (Medical Center Dental)